Cookies help us deliver our services. By using our services, you agree to our use of cookies.

“ISO standards are part of a suite of standards at the repository, national, and international levels that demonstrate trustworthy and responsible data management and stewardship. They provide digital repositories of all sizes with direction for demonstrating their adherence to quality and consistency, to respect for data integrity, and a commitment to the long-term preservation of and access to the information entrusted to their care.” [1]

OAIS, the reference model for an Open Archival Information System (OAIS) was published by the Consultative Committee for Space Data Systems (CCSDS) in 2002 and became an ISO standard (ISO 14721) in 2003. It was designed to create a “consensus on what is required for an archive to provide permanent, or indefinite Long Term, preservation of digital information” and provides a common conceptual framework describing the environment, functional components, and information objects within such a system. [2]

Following the publication of OAIS “institutions began to declare themselves ‘OAIS-compliant’ to underscore the trustworthiness of their digital repositories” although “there was no established understanding of ‘OAIS-compliance’ beyond being able to apply OAIS terminology to describe their archive”. [5]

For this reason, the Research Libraries Group (RLG) and the National Archives and Records Administration (NARA) created a joint task force to specifically address digital repository certification and subsequently published Trustworthy Repositories Audit & Certification (TRAC) in 2007. The development of TRAC was influenced among others by the certification working group of Germany’s nestor (Network of Expertise in Long-Term Storage of Digital Resources) project and their development of the Kriterienkatalog vertrauenswürdige digitale Langzeitarchive (Catalogue of Criteria for Trusted Digital Repositories). [5]

The CCSDS in turn published a Recommended Practice based on TRAC for providing audit and certification of the trustworthiness of digital repositories which provides a detailed specification of criteria by which digital repositories shall be audited. This document was accepted as ISO 16363 and sets out comprehensive metrics for what a digital archive must do, based on OAIS.

“An OAIS is an Archive, consisting of an organization, which may be part of a larger organization, of people and systems that has accepted the responsibility to preserve information and make it available for a Designated Community. […] The term ‘Open’ in OAIS is used to imply that this Recommendation, as well as future related Recommendations and standards, are developed in open forums, and it does not imply that access to the Archive is unrestricted. The information being maintained has been deemed to need Long Term Preservation, even if the OAIS itself is not permanent. Long Term is long enough to be concerned with the impacts of changing technologies, including support for new media and data formats, or with a changing user community. Long Term may extend indefinitely.” [2]

The OAIS model is neither an implementation plan nor a data model, nor a specification for digital archives but a reference model which provides a framework for archival information systems including terminology, concepts, roles, and operations. OAIS is applicable for all archives and organizations as well as for all kinds of information objects.

The following definitions are taken from the official documentation of the ISO 14721/OAIS standard [2].

Model view of an OAIS environment 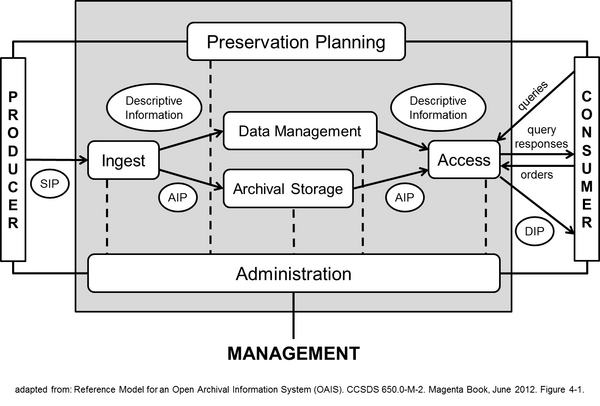 The six functional entities of an OAIS

Overview of audit and certification criteria

ISO 16363 defines so-called metrics: normative measures against which a digital repository may be judged and which it should meet in order to gain an audit. According to the ISO 16363 documentation “when evaluated together, metrics can be used to judge the overall suitability of a repository to be trusted to provide a preservation environment that is consistent with the goals of the OAIS. Separately, individual metrics or measures can be used to identify possible weaknesses or pending declines in repository functionality”. [3]

There are three main sections of metrics, each consisting of one or more subsections:

Each metric includes a short Supporting Text, as well as Examples of Ways the Repository Can Demonstrate It Is Meeting This Requirement, followed by a Discussion. The full text of the standard is available here, while an audit preparation with self-assessment template for downloaded is found here.

The Audit and Certification of Trustworthy Digital Repositories was published as ISO 16363 in February 2012 (ISO 16363:2012) by the International Organization for Standardization (ISO). The corresponding Requirements for Bodies Providing Audit and Certification of Candidate Trustworthy Digital Repositories, ISO 16919:2014, which determines the standards an organization must meet in order to provide digital repositories with an ISO 16363 audit, was published in October 2014 after extensive reviews. It specifies the competencies that auditors must have, and the way an audit must be performed, enabling digital repositories to be issued an ISO 16363 certification.